It was only about a month or two into my pregnancy when I saw a poster in a local alternative therapy clinic advertising hypnosis as a way of managing birth.

I suppose it sewed a seed and when planning a holiday another couple of months on I thought I’d buy Maggie’s book to look into whilst we were away.

I can only say I devoured it in about 2 days and even had a first listen to the CD one particularly hot afternoon whilst my partner, Andy toasted in the sun and I drifted off in the cool shade listening to Maggie speak calmly and gently.

Everything from the historical aspect of birth to the parallels with other mammals made complete sense to me. And all the positive birth stories were so abundant and joyous I just knew my body was capable of something similar. It rationalized all the horror stories friends had told me in the past and made me completely confident there was nothing to fear.

We came home and I immediately found Ruth and signed up for her course. Due to my partners work commitments we did the first session privately at home which I think really helped him ask all the questions he needed to and get on board with the natal hypnotherapy techniques.

By this time the privacy aspect of birthing, being in a dimly lit room with few people had cemented itself on my brain and I knew I had to be at home. Stories from women locally though were disappointing since it seemed often that when a home birth was planned it didn’t always happen. I knew birth could present complications but I began to question if birth itself was so unpredictable or if the standard of care simply wasn’t sufficient to enable it to be properly supported in a home environment.

It was Ruth who put me in touch with an organization called One to One. Funded by the NHS these midwives believe in one woman, one midwife and one relationship throughout pregnancy. They didn’t operate in our area but I emailed the CEO on a whim and to my delight got a call a week later from the lovely Jane to say herself and another midwife Kayleigh would like to take on my care.

So from 30 weeks I was visited weekly in my home and even in that relatively short time made really strong connections with these two fantastically supportive midwives.

I’d spoken to a close friend about home birth and was taken aback by her obvious reservations so from then on decided to let those around me believe I was going to the local hospital. Looking back, the course really helped me build this protective cocoon around my baby and myself; I had complete confidence in my plans and wouldn’t allow other peoples fears and prejudices to penetrate that bubble. Wherever I felt I might come under ‘attack’ I just simply kept quite or removed myself from the situation.

My due date was 17th Jan and it was sometime in December when I put Maggie’s CD onto my phone and listened to it every morning walking our dog. I would breath deeply and enjoy the natural surroundings, watching that low winter sun split the trees and feel it as warm golden energy.

My due date ‘came and went’ (as I’ve read so often before!). But I felt so supported by Andy and our midwives who gave us all the information we needed but allowed us to make a decision that was right for us. At just over 41 weeks we had to make a plan if things got beyond 42 weeks.

Again looking back I ‘m quite amazed how confident I was that my body was handling the situation. I’d begun to have Braxton hicks contractions on and off, was experiencing lower back ache and the bump was getting lower and lower I could barely sit down, I just knew that little person was on their way!

So it was a no brainer for both myself and Andy to simply decide we were sticking to the plan and things would happen when they happened.

11 days on from the due date and after lots of texts enquiring after ‘any news’ I had a full night of contractions from midnight to 7am, when they stopped. From 3am to 6am they were 7 minutes apart but very easy to breath through. The following night, contractions began again at midnight but with so many build up ‘twinges’ over the past 2 weeks I just took it calmly in my stride. As did Andy who remained in bed and encouraged me to get some sleep!

I’d been breathing through the contractions when at around 1.30am a particularly strong one took me buy surprise as I clambered out of bed and rushed to the loo, feeling like the strength of it put pressure on my bladder. It must have taken my breath away since Andy jumped out of bed and was suddenly alert to what was going on.

From then on they fluctuated from 5-10 mins apart. I still wasn’t sure if this was ‘it’ so we waited until 3am when the contractions were consistently 5 mins apart to phone Jane. I’d been keeping in touch with her throughout all the twinges however minor so when she listened to me talk through a couple of contractions she knew things were really moving and told me they were on their way. There was definitely a feeling of excitement!

Since One to One didn’t operate in our area we knew distance would be the only challenge to our plan and having made the call knew it would be about 2hours before Jane and Kayleigh arrived but weren’t worried since we felt there would be hours and hours to go. We’d bought a pool, which was set up and ready to be filled. So whilst Andy did that Jane suggested I get in the bath.

I found myself really taking control of my breath to manage the contractions. Being at home our dog was also awakened and unsure of what was going on gave one of his customary howls as he padded around the bathroom wondering what I was doing taking a bath at 3am. Maybe it ignited something primal in me as I began on each out breath to make a low groaning sound. It really helped ‘ride’ the contraction and extend my outbreath for as long as it went on allowing my cervix to open as I’d visualized so many times.

Being on my back felt completely wrong the last few months, so I was laid on my side in the bath and realized pushing my coccyx into the wall of the bath as a counter pressure was also something really soothing.

The contractions were feeling incredibly powerful and I even felt like pushing this early on, so we called Jane who asked me to put my hand between my legs to see if I could feel anything! Scary as that was, there wasn’t anything there, but some time on we had to make the same call and feeling down there I was amazed how my body was literally opening up.

I think I’d really retreated into my hypno bubble as time didn’t really register and I have a vague memory of a warm sensation at some point in the bath which in hindsight was my waters breaking. All I was focused on was breathing and feeling the softness of our spaniel’s long silky ears as he checked in with me to see if I was ok.

Knowing how long labour could be, Andy (unbeknown to me at the time) was stalling letting me in the pool, thinking he was saving the ‘big guns’ of pain management till last. But at 5am, as contractions were 3-4mins apart, in I went and found myself naturally move into a semi squat, on my knees with arms hanging over the edge of the pool.   As we’d practiced I got Andy to put his hand now counter pressuring my coccyx when the doorbell rang and our fairy godmothers arrived.

They were incredibly discreet, didn’t move me from my position in the pool and allowed me to stay in my squatting/breathing/howling bubble whilst they got settled in. Again I don’t have a memory of the time but there were a couple of ‘self doubt ‘moments when I cried out ‘I can’t do it’. But even as I said those words I knew somewhere deep down this was part of the process and Jane and Kayleigh could feel from the heartbeat that baby was happy and descending nicely, which was encouragement enough.

So at 7.14am, after around 5 hours of active labour, Kayleigh asked me to give this ‘last push some welly, but then ease it off’. I registered what she described and thought yes, I can do that. But the contraction came like a huge wave which I just had to ride and out came our little boy in one single pop, ‘like a salmon’ as Andy later described it!

I sat in the warm pool cradling my baby as the sun came up in our darkened room with fairy lights, scented candles and our dog laying on an armchair watching it all happen.   It was a terrifically moving and empowering experience, one that I am so grateful to have had and will remember forever.

3 months on as I write this I realize what a special time being pregnant was. Our son is one chilled little guy and I’m certain a calm pregnancy and gentle birth has paved the way for an easier transition into the world. It feels a wistful and magical memory to think about and having a happy baby just tops it off. 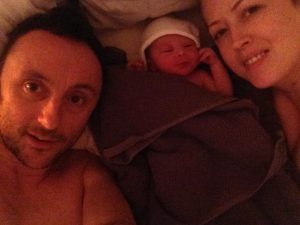 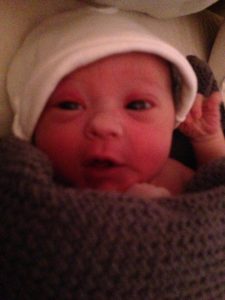