“I listened to Ruth’s home birth track every day which gave me some valuable relaxation time and imprinted the intentions and affirmations in my mind.”

Juno was born at home, in the middle of the night, while her big sister slept through. Which was the last thing we thought would happen! The home birth was planned, but everything else was a bit unknown, mainly when it would happen, and what we would do with our three-year old daughter, Lola.

I had planned a home birth after Lola’s birth had been straightforward, despite an extremely long pre-labour. I had found the post natal ward quite stressful and had got zero sleep, on top of having had zero sleep for 3 nights during labour and birth – so it definitely didn’t help me bond with Lola in those first hours.

From my own research and from information I got at the Haringey Home Birth meeting I went to, I realised that with home births there are often fewer interventions necessary.

For Lola’s birth I had been pretty clueless other than doing yoga at the Active Birth Centre, which was where I started my journey towards a more natural way of looking at birth and child rearing.

I knew that for a home birth to be successful, the conditions also needed to be right. The right atmosphere, the right headspace, the right people and for the baby to be in a good position for birth.

I got in touch with Ruth Sabrosa through a friend, and we had a great Hypnobirthing session with her. We were lucky to have her all to ourselves. I think one of the most surprising things about the day was that Ruth opened up a conversation between my husband and I about his role during the labour and birth, and our worries and hopes about the birth in general. The breathing techniques were so helpful, in conjunction with what I learned in yoga, I felt so much more confident in my body to give birth naturally, without coaching or any interventions. Ruth showed us a video of a woman giving birth almost silently, and though this wasn’t me on the day, it did make me realise that breathing can help a lot during labour. I listened to Ruth’s home birth track every day which gave me some valuable relaxation time and imprinted the intentions and affirmations in my mind.

When the time came, I went into labour spontaneously at 40+6 weeks. I assumed that because my first labour had taken 3 days, this one would be long too. So I told my husband to get some sleep and we would see how things were in the morning. But there was no sleep to be had as my contractions started getting stronger pretty quickly. We called our doula, Sue, who advised me to get in a warm bath to ease things a bit. And that helped a lot. And I think it was during this stage, which was really first stage labour by this point, that the breathing techniques I learned with Ruth and at yoga really helped. I was lying on my front in the bath and managed to stay very calm, breathing through the contractions. So much so that we all thought that labour was progressing quite slowly, and we told the midwife there was no hurry to come.

After about an hour, Sue suggested I get out of the bath as it might help things progress a bit. The contractions were getting pretty intense by now but as soon as I was out of the bath it got really full-on and that was when I started talking about going to hospital for pain relief. Ruth had told me about the self-doubt stage, which means that the birth is not far off, but in my mind there was no way I could be at that point – surely this was just how it was going to be for the whole night, and that was too much. Sue was very calm and reminded me that the midwife would be there soon, with gas and air, and let’s just take things one step at a time.

Meanwhile my husband, Rob, had called the midwife and said she better come now – which meant she had no time to collect anything from the hospital. Including of course, the gas & air. Rob and Sue had a hushed conversation about the hot water (or lack of it) and whether to refill the bath which I was now back in, with a few centimetres of water, or to try and fill the birth pool.

By this point I was fully into stage two, and my body had taken over. Even though I was in full on pushing mode and not really able to control my breathing much, in between contractions I felt quite calm and was able to breathe slowly to rest and recover.

Even though the birth was extremely intense, and during it I was thinking how stupid I was not to be in hospital with pain relief, afterwards I knew it had been the right choice. The atmosphere was lovely – the midwives chatting (the second one arrived after the birth), drinking tea, eating toast, having a shower, lying on a comfy bed with a duvet – and no one stressed or anxious. Low lights, no phones, no strangers.

I really hope that if I hadn’t been able to have the home birth, or had to transfer, that I would have been able to still use Ruth’s breathing techniques. I had the track lined up on my phone and some headphones in my hospital bag and planned on listening to the track if I had to go anywhere.

I do feel really lucky to have had the birth I wanted – I know that sometimes no matter how much preparation one does, the birth goes a different way. I now look back on it as a really beautiful and special birth, with immense gratitude to everyone who helped me along the way – to believe in myself and to see that it is ok to question the norm. 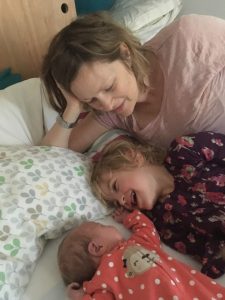