I delivered a colouring book to Elise unknowingly the day she went into labour! She sent me her birth story a few days later: 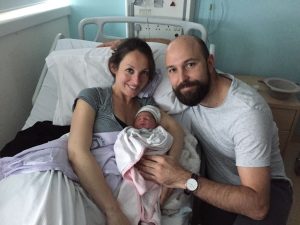 Thank you so much for the coloring book. It is beautiful.
I have not been able to relax on it as phase 1 of labour started at 6pm the day you came (friday). I listened repeatedly to the hypnobirthing tracks until 11h30pm when i felt the pain getting stronger.  We got to the hospital at midnight, i was dilated at 4cm. They could not reach the birth centre so offered the labour ward but we said we really wanted the pool and the birth centre. It took 2 hours before we were given a room; i think it was just a busy night. So during the 2 hours we were in an examation room with bright lights, i had the headsets playing the hypnobirthing tracks and closed my eyes. Damien was very helpful, provided me with water, covered me when i was cold, undressed me when i was hot, massaged my back.
When we got to the birthing centre room, I was able to get on a large bed, kneeling on a bean bag. Contractions were getting stronger and more painful. One of the midwives said the baby would probably be there by midday (it was 2am i think then). That’s when I told Damien that there was no way I could endure that level of pain for 10hours and that I would need drugs, anything. He set up the room, dim lights, soothing music, and i just tried to deal with the pain but couldn’t talk anymore (other than saying i wanted it to stop). Under an hour in the room, my water broke. It was tainted with baby poo so the pool was no longer an option. The midwife said I had to go to the ward because of risk of infection. I don’t know if it felt like a disapointment or a relief. I didn’t want the labor ward but i wanted the pain to go away as i could not deal with it anymore. Each contraction then came with the urge to push, stronger and stronger…  in the end, there was no time to move me to the ward, the baby’s head was pointing out. Damien was telling me we were at the end, but i would not believe it; i tried to let my body take over but the pain was so strong i had to scream and cry.
But in the end (as the affirmation says) all is ok. Her head popped out at 3h45am and i was able to take her right away in my arms and feed her. All this moment is a bit of a blur, so emotionally charged. Damien and I both cried so much, chocked by what had just happened 🙂
The placenta was delivered naturally 10-15min after as I was breastfeeding her.
So, we feel we very priviliged to have experienced that birth and avoided induction. Your class and preparation has definitely helped getting ready, prepared and more confident. Thank you so much for your support until the very end (or beginning!).
Now the challenge is breastfeeding. It seems like an other milestone to overcome.
Thank you again and again and again 🙂