The weekend before Tommaso was born was wonderfully busy. On Friday night we went to the opera to see my little brother-in-law perform in La Boheme, on the Saturday my closest friends from Uni came from Bristol and Cambridge and South of the River to spoil me rotten with a delicious lunch, cake and a nice walk. In the evening we went to my other brother in law’s 30th birthday party. I noticed stronger Braxton Hix in my back (which was new!) that evening and actually had to stop and do some poses and relaxation breathing on the street outside of my in-laws’ house.  On Sunday morning I noticed a tiny bit of mucus when wiping, but thinking “I am still ages away from my due date” and “first babies are always late” I just went on as normal. I was feeling full of beans so we walked about an hour to pick up my parents from Kings Cross. We had lunch with them, hung out a bit and then around 4 we went to have coffee and cake with some of our neighbours. On the way there we stopped at a Waterstones and again I was feeling some twinges in my back. That did not bother be as much as my hands though, which, for the first time in the pregnancy, had swollen a bit. That evening Stef made me some delicious fish, kale and rice and we hunkered down on the sofa to watch a film (Mr. Turner – very strange.) Whilst watching the film Stef and I were starting to feeling a bit restless: almost 38 weeks and 6 days! Not long to go. What was it going to be like? We knew that we were prepared; we were just very excited. We spent a while putting together a playlist and went through our birth affirmations before turning the lights off and having some oxytocin time.

I woke up at around 2 am feeling a bit off. I had some pressure in my back and although it did not hurt, everything in my body was telling me not to lie down. I got up and did some breathing and yoga poses, mostly cat/cow and figures of 8. I tried to go back to bed but every time my body was saying: you need to MOVE. At 2.30 I woke Stef and asked him to help me figure out whether I was in labour, because I still was not in any sort of pain or discomfort but was noticing that the sensations I was feeling started becoming more intense and frequent. He helped me get the yoga mats and birth ball out. He also put on the Hypnobirthing relaxation session that I listened to 3 times in a row to help me get into the zone. The lights were off. I could not stand the idea of light. Whenever I felt what would turn out to be contractions after all I raised a finger and he would measure them.  Thinking back I am astonished how little of what happened was conscious. My body just told me what to do, almost doing it by itself, moving from one yoga pose to the next, doing ocean breath, visualising my safe place as we had learned during hypnobirthing. I found myself doing lots of slowing down labour positions. Stef was amazing. He was like a cocoon setting up just the perfect environment for me, knowing exactly when to speak to me, when  to touch me or when to let me just do my thing. He handled all the measuring of the contractions only sharing the information with the midwife. Because the contractions were increasing really fast Stef was on the phone with the midwives twice in 20 minutes. Between 3 and 3:30, although I had no conceptual idea of the interval of my contractions I had no doubt that the baby would be coming on the 19th (which is also my brother’s birthday) and not on his due date (27th). Stef ran me a bath, lit candles and put relaxation music on. I loved being in the bath tub and again the contractions increased another notch. Since I was still feeling most of the pressure in my back I apparently did some pretty weird poses in the bathtub. Lying with my fists under my back and putting my legs up straight in the air, for instance. By this time I had stopped talking to Stef. My waters broke at 4 and the midwives told us to go to UCLH. I still was not in anything that I recognised as pain but because the contractions were giving me almost no respite getting out of the tub, drying and putting clothes on felt like hiking mount everest. Although Stef said that he could not tell from looking at me I felt hopeless. If this was labour after only 1,5 hours what was full-blown labour going to be? Was I going to be able to put my sock on before giving birth? How was I going to walk to the taxi? Stef grabbed a blanket and threw it over me, put the relaxation music on speaker phone and we walked to the cab.

We got to hospital at 5 and the contractions were coming non-stop now. I thought that it was probably best to be a bit more vocal to let the midwives know where I was at. Using my voice also seemed to help release some of the intensity of what I was feeling, like I could harness it better. They still asked me to do a stupid pee sample, though, which was impossible. It was only now that my bloody show came.  A lovely midwife called Yvonne was very insistent that I lie down and be monitored. But I simply couldn’t. Lying down was an impossibility. But somehow she managed to get me a bit more horizontal to do my internal examination and to everyone’s surprise, but mostly my own, I was 9 cm dilated. Most surprising perhaps was that although the contractions were so intense the baby was totally chilled. I asked for some gas and air. With each contraction my vocalisations got louder. I am a classically trained singer, so I can make some real noise when I want to. I felt bad for the other mum’s but being loud really helped. There was no time to wait for a place in the active birth centre, Yvonne rushed me onto a wheelchair and to a room in the labour ward. I did not care a single bit.

The next thing I remember is lying on my left side in a sort of up-side down squat. I remember looking up and seeing the midwife, Megan. Her face was beautiful clear and calm and I could sense Stef next to me and I just knew that everything was going to be fine. I was at the pushing stage now and another lovely midwife, Anna, reminded me to stay in control. I took things easy and waited for each urge to push. I was using golden threat breath now and the gas and air really helped focus on the out-breath. Stef and the midwifes were wonderful in their support. I felt like a lioness, like I could do anything. I could feel the baby coming closer and closer to crowning. The crowning itself felt like a sharp pulling, it was the first thing that I recognized as pain. I waited for another urge to push to deliver the rest of the baby and then suddenly at 6.02 am my baby boy lay on my tummy. He was and still is absolutely perfect and very alert. He started suckling very soon. We had a physiological third stage and the placenta was out within 15 minutes.

Depending on how bad-ass you’d like to imagine him he came out in a super-man or thinker’s pose with his fist plastered against his cheek. Although the crowning itself did not tear me (thank you perineal massage!), his hand did. I got a second degree tear and had to be stitched, but it really was not bad at all.

I can honestly say that I could not have had a better birth. I am sure that much of it must have been down to pure rotten luck, but I also think that all the preparation helped: from little things like eating 6 dates a day in the last month, doing perineal massage and drinking raspberry leaf tea to bigger things like going to yoga religiously and doing Hypnobirthing and relaxation sessions with Ruth.

I am filled with awe, amazement and gratitude  for the midwifes who accompanied me before during and after the birth, for Stef who held me in body, soul and mind throughout the pregnancy and birth, for Caroline and the other mums from Yogita who made London feel like a village every Thursday night, for Ruth who taught us that birth can be a positive, empowering and beautiful experience, for my body that is so much wiser than I ever thought possible and most of all for Tommaso for being nothing short of miraculous. His second name is Ferdinand which means brave voyager, if he takes life in his stride like he did his birth we could not have chosen a better name. 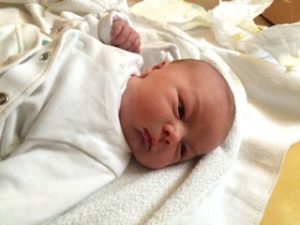